Our climber Jack ranked number 37th in the entire Nation in Male Youth A category! We are incredibly proud of Jack and his accomplishments this season. He’s an incredibly strong 16 year old climber who has established himself as the highest ranked Male Youth A climber in Florida this season! We interviewed Jack about his experience while climbing to better understand what it’s like to climb at a National competition. 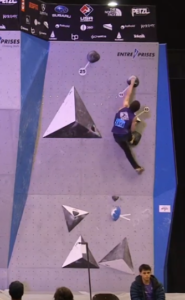 Congratulations, Jack, on a job well done! We are so proud to have you as a part of, not only our rockwall team, but our Sun Country family!

If you would like to see Jack’s competition climb, check out the video below.

Mikey is Director of Operations at Sun Country, where he facilitates all of the HR responsibilities, trains and supervises the department managers, oversees accreditation, licensure and compliance, and directs USA Gymnastics meets. He is proud to work in a local, family owned organization where his strengths in training, performance management and servant leadership create a positive impact in the community.