In this edition of Staff Features, we catch up with one of our new NinjaZone Department Leader!
Read on to gain an insider’s perspective and fascinating insight into the life of a true
Sun Country Superstar! 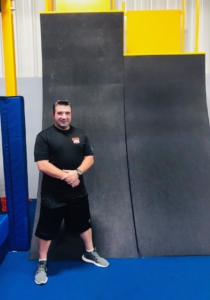 1. What is your personal philosophy?
My personal philosophy is to make at least one person’s day better, every day. Whether it was having a subject thank me after I arrested him when I was a cop, or making a sad kid smile. It really doesn’t take much effort.

2. What is the greatest challenge you have had to overcome in your life thus far?
The greatest challenge I have had to overcome thus far has to be my knee injuries. I have had 4 so far. The first one when I was 15 years old. Martial Arts has been a huge factor in my life since I was very young. Having to adapt to limitations with my knees has been a struggle.

3. Where is the best place you’ve traveled to and why?
The best place I have traveled is, Okinawa, Japan. Being involved in many styles of Martial Arts, Okinawa was a dream place to be. The culture and the history were always of interest to me.

4. What is the weirdest job you’ve ever had?
The weirdest job I have ever had was being a zookeeper. I spent 3 years working at a private zoo in Alabama. I was tasked with the care of Lions, tigers and wolves. I have a scar on my finger from when a lion cub was suckling on it, thinking it was a bottle.

7. Did anyone influence your decision to work in youth sports?
Three people influenced me to want to work with in youth sports. The first ones would have to be by Kung Fu Sifu, Troy Williams and His Sifu, Deric Mims. Their passion was contagious. The third person would be Kelli Hill. I worked for her for 13 years. I watched her take numerous kids to the Olympics. The passion she has for the sport is amazing.

9. What do you wish other people knew about gymnastics?
I wish that everyone knew just how difficult gymnastics really is. Pound for pound, not athlete is stronger or more mentally tough.

10. What do you enjoy most as a gymnastics coach?
The thing I enjoy most about being a gymnastics/ Ninja Zone coach is watching the kids grow and achieve new things. It is more rewarding than I can put in to words.

11. What is on your bucket list?
On my bucket list I have a few things left. I want to cage dive with Great White Sharks, visit China, Southeast Asia and Egypt, Visit my families historical Manor in England and get my pilot’s License.

12. If you could be a superhero, what would you want your superpowers to be?
My favorite Superhero is Superman, also known as Kal-el and Clark Kent. His super power, to me, is his faith in the good in people. He strives for being the best person he can be, even when facing massive odd’s.

14. What is the first concert you attended?
The first real concert I attended was Meatloaf. One of my favorite songs is “I Would Do Anything for Love”.

16. What is your guilty pleasure book, movie or TV show?
My guilty pleasure television show is called “Mountain Monsters”. It’s about a group of folks from West Virginia who try to find bigfoot and other creatures.

Mikey is Director of Operations at Sun Country, where he facilitates all of the HR responsibilities, trains and supervises the department managers, oversees accreditation, licensure and compliance, and directs USA Gymnastics meets. He is proud to work in a local, family owned organization where his strengths in training, performance management and servant leadership create a positive impact in the community.