In 1986, Phil and Linda Bennett returned to Gainesville with their family from Cleveland, Ohio. Linda taught preschool gymnastics and found that when she arrived in Gainesville, there was only one gym that offered youth gymnastic programs. Phil encouraged her to open a gym to provide more opportunities for area children. Linda talked to other parents and held weekly meetings at her house to get input on what programs were needed. “I wanted to offer something different” she said.

With Mike and Debra Wilkinson and Ozzie Mensah, the Bennetts opened Sun Country Sports Center in July 1987. The name “Sun Country” comes from an old nickname for the area between Gainesville and Ocala. Linda emphasizes “sports center” was chosen over “gym” – the goal from the beginning was to offer a variety of programs: gymnastics, cheer, dance, wrestling, tumbling, and judo programs. The original location was a rented 10,000 square foot facility off Newberry Road and I-75 by the Oaks Mall. There were three staff members and six children enrolled – including the children of the owners.

From the start, Linda said the business had several core goals: be a family business, be locally owned and operated, have an active presence in the community, and show concern for each child enrolled in their programs.

The gym filled a need in the Gainesville community, evidenced by its success. In 1989, the other gymnastics gym in town – Brown’s – offered to sell their business to Sun Country. The new location at Millhopper became the center of operations. In 1990, the rented facility closed.

Business continued to prosper for Sun Country. In 1999, land was purchased in Jonesville. Though there was little development on Newberry Road in the western part of Gainesville at the time (only farm fields and woodlands), Sun Country became an anchor business and Sun Country West opened in 2000. The new facility had 40,000 square feet filled with mats, bars, rings, and a rock climbing wall. Three building expansions followed in the ensuing years – cheer and dance rooms added in 2004, the west wing added in 2007, and a swimming pool in 2009. Between both its facilities, Sun Country now has a combined 55,000 square feet of space and works with over 1,500 children annually.

For the Bennetts, Sun Country has always been about family. Their children Jesse and Jodi both grew up and worked at the gym. Jesse designed the company mascot, appropriately nicknamed “Sunny.” Jodi became the company’s Marketing and Director of Operations at Sun Country West. Their staff has grown to 65 full and part time employees, peaking at 99 during the summer months. They offer after school programs, summer camps, birthday parties, gymnastics, trampoline and tumbling, cheerleading, dance, rock climbing, swimming, competitions, and have a partnership with World Martial Arts.

One of the innovative ideas that became a recognizable sight around Gainesville was the Gym Bus. The seats were removed and rings, mats, bars, a balance beam, ball pit and trampoline were installed inside. The bus is taken to schools, daycares, and community events as a way to give children a sample of the Sun Country experience.

When asked what has changed since 1987, apart from the growth in business and facilities, Linda said she could only think of what has stayed the same. “We are available to our customers and run a family business. We continue to grow and offer different programs” to meet customer needs.

Phil and Linda credit the success of Sun Country to the employees and customers who have been a part of it through the years. Linda thinks of their work as “always being fun. It’s not like a job I felt I had to do for a living.” That attitude has made Sun Country live up to its mission of providing a safe and inspiring environment offering “fitness and fun for everyone”.

We strive to be the first choice in the area for active children, families and adults. 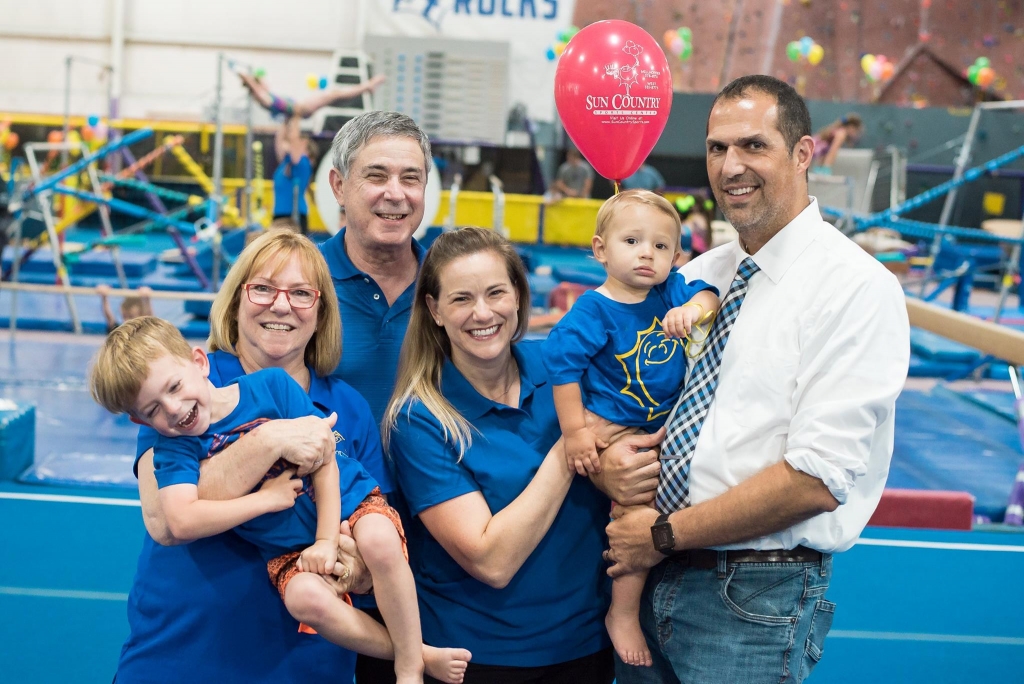